As a child I was very lucky to have my mum's wonderful food. All Indian, with strong Bengali regional influences, my mum always cooked 'by feel' with no written recipe, no scales, no measuring spoons, just her instinctive knowledge of what would work right. Sadly, I didn't receive her special gift, even after trying to watch her many times in the kitchen. However, what I did receive was a taste for really good Indian food which in adult life has ended up being both a blessing and a curse. The sad part is that I find it very difficult to enjoy typical 'curry house' fare. Many of our typical high-street Tandoori restaurants make curries up out of large industrial jars of ready made sauce, leading to consistent results, but a terrible compromise on flavour. In my book, curry only works through the alchemy of cooking all the ingredients together, hence adding cubed meat to a ready made sauce is such an anathema to me.
Now, as I said earlier, I didn't obtain my mum's ability to cook by feel. This means I have to turn to the cook books. There are many excellent writers on the subject of Indian food; Mridula Baljekar, Anjum Anand, Vicky Bhogal, Reza Mohammed, Cyrus Todiwalla and the lady who started it all, Madhur Jaffrey. However, the man who is at the top of British Indian gastronomy currently is Atul Kochhar. Atul's “Benares” restaurant has shown that Indian food can fit the fine dining experience, being on of the very few Michelin starred restaurants serving Indian food in the UK. If you eat there, you will find real innovations based on the flavours, textures and cooking methods used in Indian food. Atul is pushing the boundaries, and achieving real success in doing so.
However, it isn't all about invention. If you want to be an artist, you start by learning the basic skills, then you copy from the great masters to refine your technique before developing your own style. Even the great Picasso studied and copied the works of the greats such as Velasquez. In Atul Kochhar's book “Simple Indian: The Fresh Tastes of India's New Cuisine”, Kochhar shows how he knows and understands completely the nuances and subtle differences between India's regional cuisines. In this book he shows his knowledge of the great dishes of India and his mastery over them, which allows him to experiment so successfully.
When it comes to Indian cooking, I am still serving my apprenticeship. So I attempted to make Kocchar's Parsi Lamb Curry with Straw Potatoes (Salli Ma Kharu Gosht) from Simple Indian (above). It turned out to be a wonderfully authentic north west Indian dish.
First you must start by preparing the base of the curry sauce: onions, garlic & ginger paste, salt, chili powder, cumin, turmeric, cinnamon, dried red chili, cloves and green cardamom.
Then you ensure you have your lamb in cubes, optional fresh chopped tomatoes (which I would recommend to be added to the dish as they lend the gravy flavour, colour and substance), and the deseeded green chilies, sliced in half.
Once the ingredients have been prepared, you can then start cooking. This means you can pay proper attention to what you are doing. I can't chop tomatoes whilst trying to keep an eye on something else frying. If you can multi-task like that, go ahead!
Start by frying the whole spices in groundnut oil; dried chili, cloves, green cardamom and cinnamon. 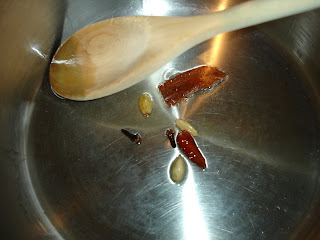 Then add in the onions. 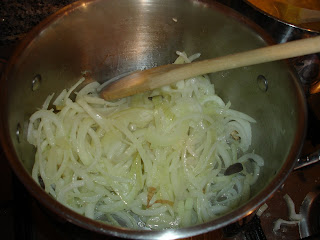 For a curry sauce with deep flavour, you need to fry the onions for a good 10 minutes. They need to start going brown at the edges. This isn't really done in European food, but that slight caramelisation (and slight burning) will impart flavour into the finished dish. 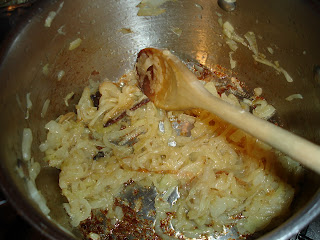 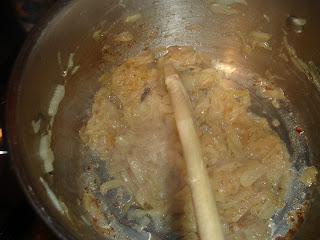 After stirring for 2 minutes the ground spices; turmeric, salt, cumin and chili powder are added. Cook these out for a minute or so. 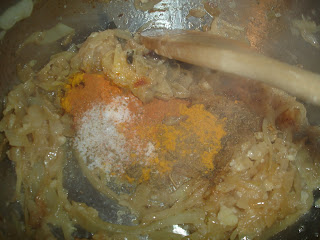 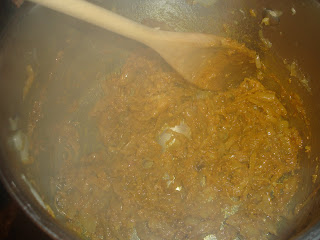 You will see from the picture above that the turmeric and spices have blended in with the sauce base ingredients and there is quite a bit of steam. This will lead to the curry sauce having a mellow and smooth spicy flavour.

The next step is adding the lamb and chopped tomatoes: 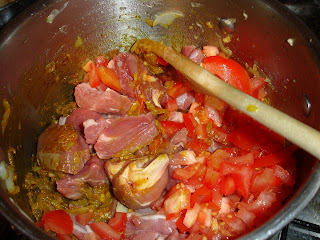 I found I had to stir the ingredients quite frequently to make sure the tomatoes were fully heated through and were starting to break down and to ensure the lamb was browned all over. 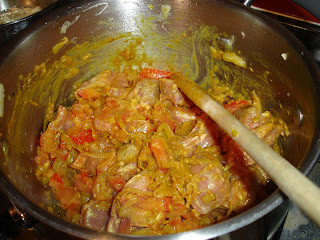 I then started on the straw potato topping. This involved cutting up 2 small potatoes into chips a little thicker than matchsticks but not as thick as French fries. The potatoes were typical Summer type potatoes; a little waxy, so I was sceptical about how well they would fry and so took the decision to double-fry them. The first frying happened just after I added the water to the curry and left it to cook for 40 minutes and the second frying was just before it was time to serve up. 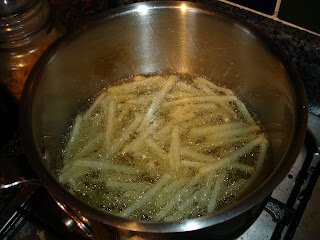 Allowing the excess oil to drain off: 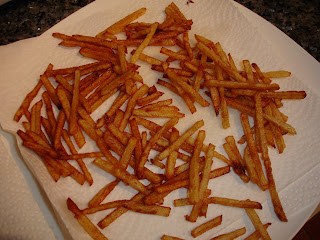 Meanwhile the curry was cooking away..... 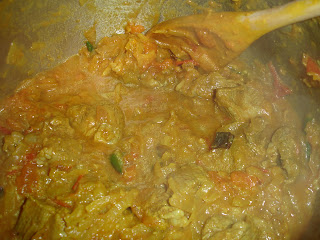 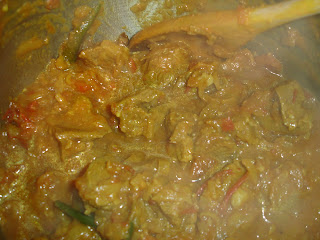 Second frying of the straw potatoes: 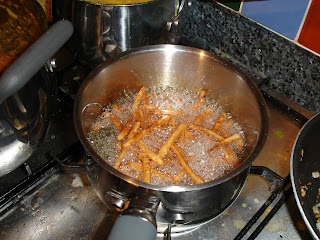 And voila - Parsi Lamb Curry with straw potatoes! (I couldn't resist making up some dahl to have with it, though!) 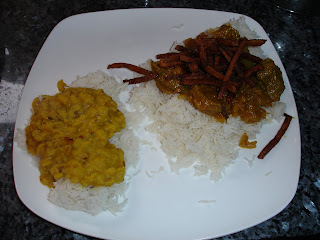 This was an easy to follow recipe with nothing to throw the cook off track. If everything is prepared in advance, all you have to do is follow the simple cooking instructions. Atul Kochhar's description of the method is direct and to the point. Whilst the straw potatoes added a new texture and some pizzazz to the look of the dish, strictly speaking, this would have been a very tasty lamb curry without them. The deseeded chili sliced lengthways brought a heat to the dish which was not overdone and allowed the flavour of the lamb and North Indian spicing to shine. This was a very nice curry that I will be making again.