On this grey Christmas day in London, I'd like to wish you all a very special day. I hope you enjoy the merriment, company and festivities of the day. We will be cracking open the champagne later to enjoy a Merry Christmas!
Tomorrow I am off to spend the day with my mother in law who will be cooking us a roast dinner (beef, since you ask) with all the trimmings. A proper roast dinner involves a terrific amount of hard work and planning. So I asked whether I should bring the pudding. It turns out no-one is all that keen on Christmas pudding or Christmas cake. And that is pretty damn good, as I didn't plan ahead and make either over a month ago. Instead, I said I'd bring mince pies. Homemade ones.
What was I thinking?! You all know about my fear of baking. I'm just terrible at it. Cakes sag in the middle, muffins are gluey, bread rock hard. It's desperate stuff. My oven and I don't get along. I am fairly sure that it is lying to me about the temperature it is at too.
My very good friend Chris is something of a baking aficionado. He can make cakes, pastries, savouries, cupcakes. The lot. He has patience and care and skill. I asked him how to get out of my mince pie predicament. He put me onto Auntie Delia's recipe for Caramelised Mincemeat Ravioli. The advantages, he said were that firstly the pastry was 'easy' (I was sceptical), but secondly, that it could be made slightly in advance, stored in an airtight container, and grilled with the icing sugar on top when needed. This second advantage sounded good to me.
So, the recipe can be found in 'How To Cook: Book One' but is also currently available at:
http://www.deliaonline.com/recipes/main-ingredient/mincemeat/caramelised-mincemeat-ravioli.html
My first decision involved the mincemeat. Make my own or buy from the shop? When I looked into what was involved in making my own mincemeat, I was more than a little frightened. One recipe made up three whole pounds of the stuff – what was I going to do with all that mincemeat? Where on earth would I put it??
Again, Chris came to the rescue. He suggested buying a jar of mince and freshening it up. He suggested orange zest or extra dried fruit. I decided to go all out on the booze front (after all, it is Christmas!!). So I took some extra raisins and dried mixed fruit peel and marinated it overnight in a good couple of tablespoons of brandy. 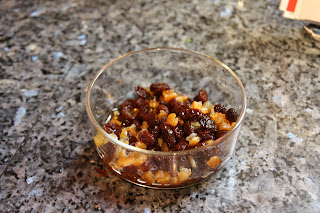 Once marinated, I mixed up in a bowl with my jar of mincemeat. I've told you my secret, but who else is going to know when I serve them up tomorrow? 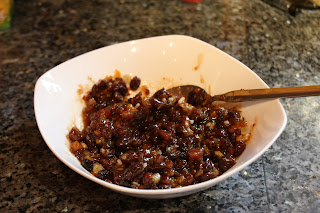 Now came the truly terrifying part. The pastry.....
Delia recommends keeping the butter as cold as possible by wrapping in foil and refridgerating. So far, so good. Even I can manage that! 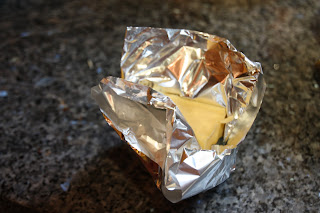 Then she recommends sifting flour and salt into a bowl and grating the butter into the flour. Having spoken to my mother in law about pastry making, it appears that the 2 biggest barriers to decent pastry are 1. overworking the pastry and 2. allowing the pastry to become too warm. Clearly, this grating process is to ensure the butter stays as cold as possible for as long as possible whilst increasing the surface area to volume ration enough that combining butter and flour becomes as easy as possible. 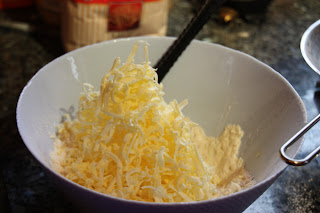 My only criticism of the method is putting in all the grated butter in at once. I found the sheer weight of butter started squashing itself down. Instead of fine gratings at the bottom, I ended up with lumps. 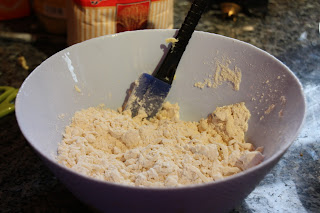 My advice therefore, is grate butter a few minutes at a time and mix thoroughly into the flour with a palette knife or spatula before grating again.
The next stage involves adding a small amount of water (2-3 tbsp) to the mixture and starting to work together with palette knife or spatula to bring together. Perhaps my mix was particularly dry, but I needed nearly 6 whole tablespoons of water before any coming together occurred. Delia says more moisture may be needed, but I was disconcerted by needing so much more than the recipe stated. I hoped for the best..... 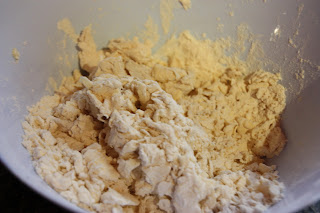 I managed to get the dough together, then bagged it up and put it in the freezer to chill. I was glad to have got the pastry making stage out of the way and breathed a sigh of relief! 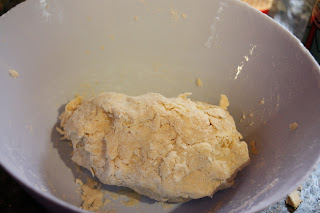 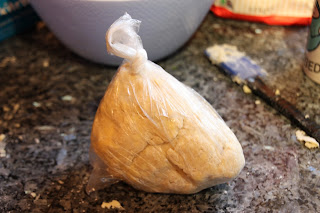 After half and hour (during which I preheated the oven), I retrieved my pastry. Can't say it looked good, but I hoped it would hold together. 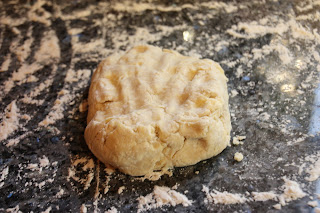 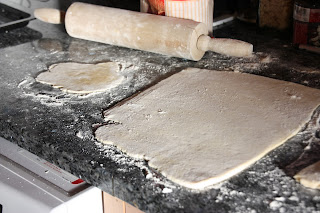 I managed to roll out the bottom sheet.
I then laid it out on a baking sheet. 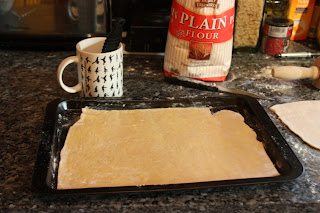 Then it was time to egg wash the pastry. 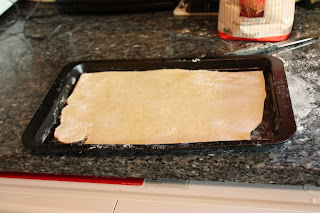 Next was dotting my mincemeat on the pastry sheet. 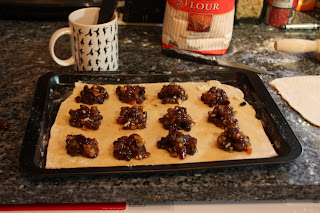 Then I had the second pastry sheet to roll out. I will confess this took some repairs! 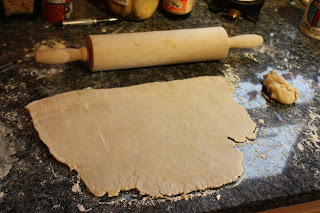 Eventually I laid my second sheet over the mince and pastry. 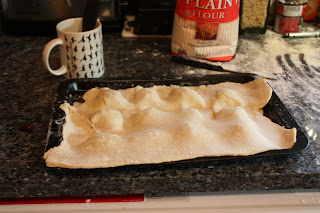 Time to squeeze down, shape and use a pastry wheel to cut into individual raviolis. 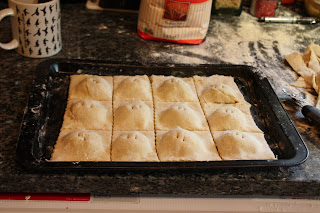 Then to bake. I have to say I was rather impressed with my results..... Although it won't be until tomorrow when I sprinkle icing sugar and grill to get the caramelised effect will I know whether they truly succeeded or failed. 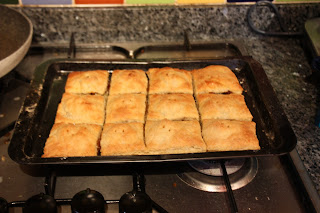 But not bad so far for a sad failure at baking, eh?
Merry Christmas!
Posted by Snigdha at 15:00