There are many great pairings in the world. Mick Jagger n' Keith 'Keef' Richards, Morecambe n' Wise, Jeeves n' Wooster, French n' Saunders, Fred Astaire n' Ginger Rogers (although famously she had to perform each step backwards and in high heels!); the list of legendary pairings goes on and on. In food, we have pairings such as Fish n' Chips, Sausage n' Mash. But food and wine is a truly wonderful pairing indeed. There is something about a wine which when perfectly picked somehow manages to bring out, counterpoint and sometimes even 'sing' with the flavours of the dish. It makes the whole experience of eating a meal glorious.

In the late 1990s and Noughties, we were bombarded by wines from all over the 'New World'. Countries which we Brits had not realised were viniculture nations were suddenly shipping their exotic sounding wines to our shores. South Africa, Chile, New Zealand, Argentina, and Australia were making big waves and people were happy to experiment. We twigged that California's Napa Valley was home to many other wineries, not just E & J Gallo or Paul Masson. It was an exciting time, and we forgot all about France. French wine at the time had lost its glamour. We wanted what was new and exciting. But now that initial excitement has given way to greater familiarity, we are ready to go back to French wines.

French wine is having a resurgency. Led by the new economic powers who want a piece of that European sophistication, buyers and collectors are going back to France. It is Chinese millionaires who are buying Chateau La Fite Rothschilds in their droves, to store in cellars. There is even a Chinese edition of Decanter magazine! And the spending power of the wealthy in the states of the former Soviet Union also means the high class wines and top vintages are always in demand.

I was recently invited to a trade tasting event by an association of wine growers from Bordeaux, 'Cercle de Rive Droite'. When you start to learn about wine, and I confess to being something of a beginner, you quickly learn how connected to the geography and climate of the area it is grown that wine truly is. Bordeaux, as most people will know, is in the south west of France. It is just east of Gironde province. In London, our great river creates a North-South divide. In Bordeaux, much like Paris, it is a Left-Right divide.

The Left bank of the Gironde is where the wines of Medoc, Haute Medoc and Graves come from. Cercle de Rive Droite (circle of the right bank) is located the other side of the river, taking in the regions of Cotes de Blayes, Entre-dex-Mers, Premiers Cotes de Bordeaux, St Emilion and its satellites. It is an association representing the growers of this specific area of Bordeaux, specifically 143 chateaux.

I attended the event with Food I Fancy's Tash. Her food blog can be found here: http://www.foodifancy.com/ In fact, if it weren't for Tash I would have missed out on this event. So my thanks go to her for letting me tag along as her 'tail end Charlie'

We were very keen to learn more about the region and sample the 2012 vintage (the latest production of wine) but had a great deal of curiosity about the older vintages of 2009 and 2010. When Bordeaux makes fine wines, to high standards of harvesting, crushing, pressing, fermenting and bottling, the resulting wine can be stored and matured for several years. Often, and depending on the exact appellation, they can be stored for anything from 2 to 10 years.

So we set about tasting with great enthusiasm. Just when we were getting excited by the wine, when we had a real surprise. We bumped into wine expert Oz Clarke! Author of many wine books and THE wine expert (along with Jilly Goolden) from the ORIGINAL Food and Drink programme on the BBC. We couldn't believe our luck!

Oz was very kind to us, and spent time explaining what we should look for in the wines of this particular area. He was chatty and full of spirit (pardon the pun!). He didn't seem to mind our (oh, I'll be honest, my) slightly starstruck demeanour. He was a complete gent! 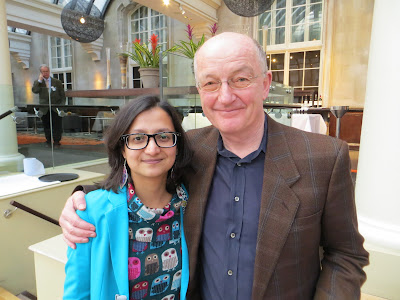 We were very lucky to be able to try such a variety of top producers from the very best appellations of the Right Bank of Bordeaux. There were numerous Chateaux from St Emilion Grand Cru, highly respected and prized. There were the rich velvety flavoured Pomerols. And some Fronsac and Canon-Fronsac, with a slightly more fresh and light tasting sensibiliity.

The producers we met were informative and passionate about their love of wine and viniculture.

We were very grateful for Oz Clarke's help, because he put us onto Aline Guichard-Goldschmidt and Paul Goldschmidt's three wines in the show; a Chateau Siaurac from Lalande de Pomerol, a Chateau Vray Croix de Gay from Pomerol and a Chateau le Preiure from Saint-Emilion Grand Cru Classe. These were special finds. 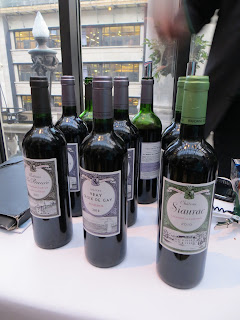 Imagine our surprise when we learnt that one of the exhibitors, Agnes Florisoone from Chateau Godeau, herself is a food blogger! Her wine was a Saint-Emilion Grand Cru which was deeply coloured, almost purple, rich, with a touch of spice and blackberries. The wine is made of 90% Merlot, and 10% Cabernet Franc grapes, grown on a vineyard which has been producing wine for the last 35 years. Her excellent French food blog (with original recipes throughout) can be found at: http://www.cookagnes.com/ (You may need some GCSE French revision and a dictionary to hand, some of my English readers; I certainly did!). 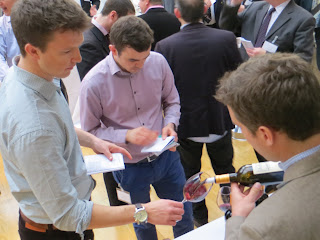 As I have said above, the pairing of food and wine is a very special one, so many of the exhibitors were as passionate about food as wine. We met Zita Dubois of Chateau Cassagne Haut-Canon, a producer of Canon-Fronsac appellation wine. She loves her own production wine so much, she uses it in her cooking! The classic dish Boeuf Bourguignon can only be so called if made with Burgundy wine, grown and produced in central France. Zita makes her own version, which she naturally calls Boeuf Canon-Fronsac! Zita's family have been making wine for 5 generations, and her Canon-Fronsac is made from 60% Merlot, 20% Cabernet Sauvignon and 20% Cabernet Franc grapes. 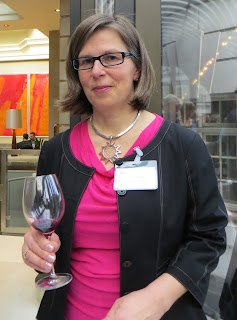 The only white wine exhibited during the event was from Chateau Hostens-Picant, a winery which has had vines since 1460. Their only interruption to production being for 7 years after the end of the Hundred Years War. The wine was a Cuvee de Demoiselles Sainte-Foy Bordeaux blanc, which was well balanced and a nice break from all the reds. A change is as good as a rest!

The Clos des Jacobins Saint-Emilion Grand Cru Classe was another favourite, made by Magali and Thibaut Decoster. 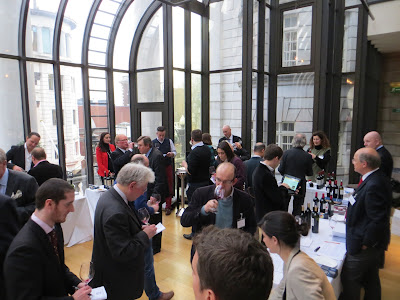 Generally speaking, 2009's vintage has a lot of fruit with big flavours and 2010 was a good year. With another 3-5 years, these will be at their peak. 2011 was not a great year, and it may take many years for bottles to reach their top condition. 2012 is a slightly happier story, but the wine will take time to reach its full potential.

I had a super time investigating these wines and meeting the producers. There were several appellations I had no knowledge of at all. I might therefore have hesitated to order them in a restaurant or wine bar, just out of apprehension of the unknown. Being able to sample the wines, learn about the differences between the appellations which can be quite pronounced given their geographical proximity was a great experience.

For more details, the Cercle has its own website: http://www.cerclerivedroite.com/

Coming soon: Cercle de Rive Gauche, for the winemakers on the other side of the river: http://www.decanter.com/news/wine-news/583709/cercle-rive-droite-moves-into-left-bank-of-bordeaux

I would like to thank Tash and Cercle De Rive Droite for allowing me to come to this event.

Please don't ask me why the font is so big on this post. I asked blogger nicely to put it into 'normal' size, but it insisted on humungous text. I'm very shortsighted, so it's no problem for me. But I'm not intending to patronise any of you with large print text. I'm sorry, but I'm not great at techy stuff. Forgive me!